A Different Kind Of Musical Story 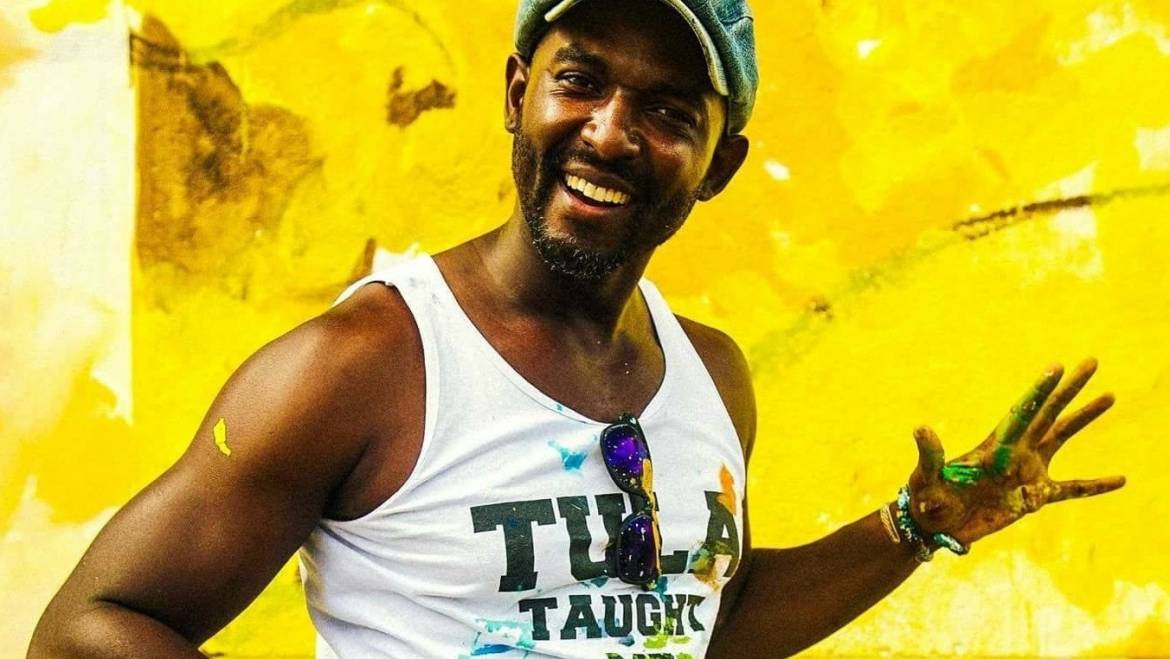 We venture into music played on walls. What does that mean? Francis Sling’s story will give you the answer. The artist known as Francis Sling was born in the year 1979 in Curaçao, where he grew up in the district of Seru Fortuna. He lived on the island until he was 20 years old, when he moved to the Netherlands to study graphic design. He has been living there ever since.

If you were to ask him he would tell you a myriad of sources provided the impetus for his artistry, among them his father who “is an artist without even being aware of it”. His self-taught skill and creativity at repairing pretty much anything he found in and around the house thoroughly inspired Francis to be creative with his own hands.

But his initial step on the path of an artist life was actually brought about by another artistic talent in his family: his aunt, who is none other than Norva Sling, a renowned ceramicist in Curaçao. Her work drew his interest from a very early age and inspired him to dabble in the arts himself.

However, after he had gotten his graphic design degree in Amsterdam, had worked in the office for a few ticks, had realized it wasn’t a good fit for him, he decided to launch his own graphic design firm.

The significance of that firm’s name, JrCreator, typifies his out of the box mindset. The symbolism is two-fold: 1. Jr because his father’s name is also Francis Sling and Sling himself is a creator, 2. Jr because he is a creator and is a son of the Creator.

And his firm faired quite well, having designed the logos of popular Curaçaoan and Aruban bands like Dreams, Cache, Buleria and Gentz, in addition to shooting their promo shots (all in his house in Amsterdam).

And little by little the commissions started coming in. His works in the Netherlands include many portraits for private clients and over seventeen paintings in the Curaçao House in Den Haag, eight of which were visualizations of the contents of the eight stanzas of Curaçao’s national anthem and two of which were life size paintings of slave rebellion leaders Tula and Bastian Karpata.

Also, he painted up a storm in Aruba and Curaçao. Among the masterpiece works of art he has created in that time are this kaleidoscopic mural in Aruba commissioned for the Aruba Art Fair 2016.

And this richly vivid mural in the Scharloo district of Curaçao.

When he’s painting a mural, he himself doesn’t know what he’s going to conjure up on the wall, his brush pretty much has a mind of its own.

“It’s like dancing salsa, when you first learn the steps it’s ‘one two three, one two three’. But when you become a virtuoso, it’s all intuition, no more one two three. And when you’re at that level you don’t dance the same steps twice unless you’re doing shows. When you’ve learned all the rules, you become good enough to break them.”

If you were to ask him what molded him into the person and artist he is today he would tell you his degree had nothing to do with it. It was all a spirited blend of passion and will.

“What I want people to see in me and my work is an embodiment of the path to happiness. Because to live is to suffer, from the moment you are born, and what I want is for people to glean a sliver of joy in their journey from looking at my work. It gives me immense satisfaction, because I’m constantly looking for that slice of bliss myself.”

He doesn’t shy away from taboo topics in his work. This comes to the forefront in the inherent symbolism of his mural in Scharloo, which has the title “Three O’clock Romance”.

Why that title? Well, the mural depicts the budding romance between two birds that enjoy each other’s company on a lone tree branch one day. Then the next day the birds, the memory of their previous amorous encounter still fresh in their consciousness, fly to meet each other once again. And so they repeat it the day after that, and the next day, and the next.

And they do this without making any agreements to rendezvous. They go about their business and the fact that they fly back to that branch at 3 o’clock is a tacit affair, they simply go there hoping the other will be waiting.

“And this interaction between these two birds is a symbol for relationships between people. In my opinion that’s how you know they really want to be around each other; when their agreements are implicit. That’s how a solid foundation is laid for a romantic interaction to evolve into a two month relationship, a five year relationship.

Because if they were to make overt promises to frequently be around each other, they would eventually only be doing so to keep their promise to one another. It would become about the promise instead of the partner.

And this chimes with the question of the validity of monogamy. Is everyone really meant to meet one partner, get married and lead a conventional family life?” (Quite the existential turn that took, isn’t it?)

Francis Sling has worked as a graphic designer, graphic artist, photographer and painter, but aside from being very visual in his arts, music also takes up a large portion of his creative mind. He plays the guitar and percussion instruments. The latter stems from his gravitation towards the folk music of Curaçao and Latin America growing up as he greatly enjoyed the rhythms of Tambú, Seú and Aguinaldo.

He played and danced in groups of the last two, was in a brass band, formed an Isocco-inspired band alongside his brother in which the members played self-made instruments, and played the Conga in the Christian band of his church.

Thus it’s fair to state that music has played a very important role in his life. In fact, it continues to hold a prominent position in his creation process as he listens to music while he paints and gives music salience in the videos he makes about his art on YouTube.

Check them out here:

Oh and he also writes poetry. Talk about a Renaissance man!

If it were up to him, he would stay in Curaçao indefinitely as he draws enormous amounts of inspiration from his native island’s surroundings – incidentally, the island was the site of his first encounter with a paintbrush and also the site of his first art exposition – but he likes to leave his prospects open. After all he can’t just up and leave Holland at the drop of a hat, his son whom he loves very much lives there.

But if he should ever decide to go back the island certainly wouldn’t be less colorful for it.