When Salsa Music Took Over the World 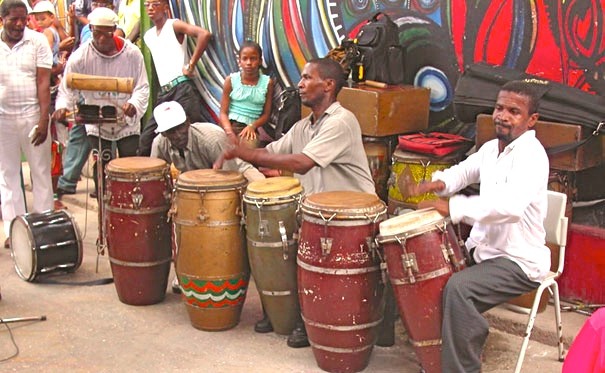 Salsa music! That whirlwind of congas, horns, intricate dance moves and suave attitudes. The mastery of which has become the main armament in the seduction weaponry of many a Don Juan this side of Antonio Banderas in his ‘Desperado’ days. The global phenomenon, the international dance found in pretty much all the metropolitan cities of the world.

But that ever persistent question still inexplicably endures : Who invented the Salsa? The Cubans, Puerto Ricans, Dominicans, Colombians, Venezuelans?

Well, believe it or not when it first started gaining traction in the 1960s and 1970s as a music form, even the name Salsa caused a rift. Several New York musicians who had already been performing Cuban dance music for decades when Salsa was popularized initially didn’t even like the term.

They were like “Nothing new here, just the same old music that was played in Cuba for over fifty years.” or “Salsa? Like out of the ketchup bottle?”. I’m paraphrasing but you get the gist.

But did you catch that first one? It was the music that had already been performed in Cuba for over fifty years. So how did it start exactly? Well I can’t give you the exact date and venue, it’s not like they had Instagram back then, there was no #icantellthisiswherecubandancemusicisbeingborn.

So we will simply go with a general outline of how it went down.  The music form we know today as Salsa sprang into existence around 1920 in Santiago de Cuba and Guantanamo, on Cuba’s eastern side, from the Cuban music form Son, a mixture of Spanish troubadour music and African drums, and Afro-Cuban dances like the rumba. There, Spanish and Afro-Cuban musical elements came together, both in terms of rhythm and the instruments used.

It remained a local thing for a while because Cuba is huge, folks. It accounts for more than half of the land area in the Caribbean. That’s no joke. So you can imagine how news wouldn’t exactly travel fast from one end to the other back in the early 20th century. But by mid-century, in the pre-Revolution era, the music somehow made its way across the Caribbean island into Havana where it mingled with American jazz and the popular music heard on the radio.

And by the end of the 1950s, many Cuban and Puerto Rican musicians had flocked to the U.S., especially to New York City, settling in Spanish Harlem. And of course this is where things get fuzzy and the Puerto Ricans’ claim to being Salsa music’s primogenitor comes in as it was in this co-existing environment where the music genre’s development came full circle.

But how exactly did it spread so far and wide? The answer is Fania Records.  Co-Founded in New York City in 1964 by Dominican musician Johnny Pacheco (I think this might be where Dominicans stake their claim of ownership), this record label became known as the “Latin Motown” and would go on to become the most influential record label in Latin Music history.

They are also the reason the term ‘Salsa music’ received widespread adoption. It was first coined by New York City Latin Music promoter Izzy Sanabria and they quickly took it and ran with it and the term took on a life of its own.

Fania Records produced one hit after another with legends such as Hector Lavoe and Celia Cruz on their roster and made Salsa so popular in the 1970s that Fania bands and artists, the most popular of which were known as Fania All-Stars, were touring all over Latin America.

And let’s not forget these artists also performed at the Rumble in the Jungle, the historic 1974 boxing match between Muhammad Ali and George Foreman in Zaire (now Democratic Republic of Congo), arguably one of the, if not the, greatest sporting event of the 20th century. This got them, and by extension Salsa music, some global exposure.

Now, granted, the first legitimate Salsa bands were Nuyoricans (New Yorkers of Puerto Rican descent) or Puerto Ricans who had moved to New York. And it was from New York that the Caribbean music form spread throughout Latin America and subsequently the rest of the world.

But these factors don’t make the music’s Cuban roots any less valid. This point must be stressed because for the longest time Cuba got snubbed when it came to the Salsa story.

Case in point; Many leading Salsa artists have kept it very broad and vague when discussing Salsa and make no mention of the music’s Cuban foundation. And in the very significant 1979 documentary movie “Salsa: Latin Pop Music in Cities” , this ambiguity reached a fever pitch.

The history of Salsa is namely portrayed as a mixing of African, Caribbean, and New York cultures and music, and yet again not one single mention of Cuba. But that’s not all. In one scene, the Afro-Cuban genres of Batá and Rumba are shown being performed in Puerto Rico, not-so subtly implying that they originated there. Well.

And in case you’re still not convinced of Salsa’s Cuban origin, consider this: when the Mariel boatlift happened (the mass, and I do mean mass, emigration of Cubans to the U.S. after the Cuban government had given them carte blanche for a few months in 1980) many of those Cuban refugees, the ones who weren’t Scarface, were musicians and when they gave Salsa music one listen, they were like “What the hell are they doing playing this old Cuban crap from the 50s?”.

But hey, all politics aside, this Caribbean music form was one of the most impactful music stories of the 20th century. Nowadays it has local variations and blends in countries throughout Latin America, North America, Africa, Europe and Asia.

It may have been a bit touch-and-go for a while there with the ascension of Merengue and Bachata and many Latin youths leaning more towards American sounds but thanks to producer Sergio George’s commercially successful collaborations with international powerhouses like Tito Nieves, La India and Marc Anthony, the music form experienced a revival from the 1990s onward.

And with the explosion of dance videos through sites such as YouTube, legions of people have and continue to learn and enjoy Salsa.

Even with the advent of Kizomba, this Caribbean creation’s reign continues unfettered. No wonder everyone’s fighting over bragging rights.

Listen to some Salsa on Skempi