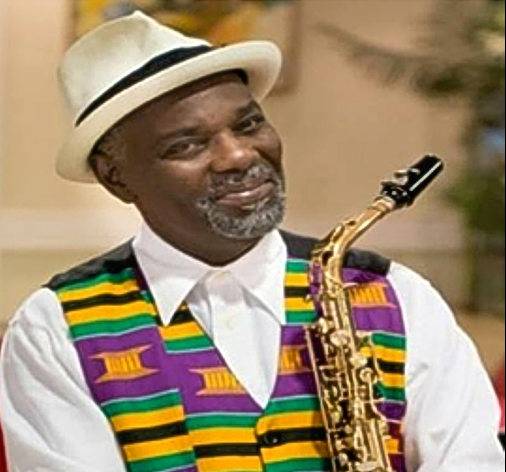 Is a professional Curacao born artist who started playing music at the age of 10. With a great passion to learn and to study music at an early age, he received a scholarship to study and graduated from the Conservatory of Music, Hato Rey, Puerto, Rico, with a Bachelor of Arts Degree, Cum Laude. John is a recipient of the Curacao Galardon Vitrola award for “Best performing jazz artist 1988, and has produced 7-CD recordings and is today, a versatile solo artist extraordinaire and a master of improvisational jazz saxophone, performing on the sax, clarinet and flute. Best known today as ”JJ Cool, John James is a composer, producer, recording artist and teacher, well versed in all musical styles. Classically and formally trained both in Curacao, the Conservatory of Music Puerto Rico, Manhattan School of Music and under the private tutorship of New York jazz legend, jazz saxophonist, the late, Frank Foster, a previous band leader of the Count Basie Jazz Band. The father of two beloved and special children, Dr. Kaia Willekes-Rosa, MD, and son, John-Malcolm Jabari Willekes, a graduate of Claflin University, S.C., School of Natural Science.

His passion for music continues in every aspect of his life, and his latest performances here in Curacao includes “An Evening of Jazz & Creative Music” concert at NAAM, and regular appearances at Blues @ Avila, both of which are located in Pietermaai. Last year both he and wife, band manager, Mrs. Edna Monifa Willekes-King, launched their (DOJACMC) Development of Jazz and Creative Music project, by introducing to the underserved communities in Curacao, their (3-L) project called: “Look, Listen & Learn”, which are a series of free jazz concerts performed directly in neighborhood community centers or Barios.

The Curacao Creative Jazz Music Ensemble, directed by band leader, JJ Cool, in collaboration with jazz guitarist, composer, arranger and educator, Erwin Prudencia, is comprised of only local professional jazz musicians. They successfully presented their original jazz compositions with performances last year in Sentro di Bario Seru Papaya, and Sentro di Bario Wishi Marchena. The concept objective of the (3-L) concerts are designed to inspire young children from 5 to 15 years old to look and listen to live jazz performances and by this process, they will learn to appreciate high level jazz music in together with their family and friends in their own communities. He strongly believes that this process will awaken their curiosity and help to inspire the truly gifted children to want to study and to play jazz music at an early age.

JJ Cool states: “Our children are geniuses, and we are on a music mission to expose our youth to the great art form called jazz, to all children in every community in “Dushi Korsou!”.

The late 1980s to the late 1990s in Curacao will go down in jazz history as the decade of the “Great Jazz Revival”, which was orchestrated by the talented new breed of Curacao jazz artist both already present on the island as well as the artist returning home from America, Holland and the Caribbean. I refer to them as, “Jazz Baby Boomers”. John James became an integral part of Curacaos’ “Great Jazz Baby Boom Rival”.

What one artist in particular, baby boomer, jazz saxophonist, John James Willekes aka JJ Cool has done for the “Great Jazz Revival” of the 80s & 90s has been legendary and history making for both the local, regional and international jazz community. The leadership and performance skills that are brought to the table became an invaluable asset to the community, which qualifies him without a doubt to be considered as one of several local jazz artists to be considered for the prestigious “Cola Debrot Award” for music, education and culture.

With a God sent, cultivated philanthropist mind set, John James always worked to help solve problems existing in the jazz music world in Curacao. He did so effortlessly and without looking for credit. He made key decisions by taking action and tackling issues because it was not only the right thing to do, but he had the expertise and creative energy and support, to get the job done. John James departed Curacao for a decade to work on personal growth and self-development in his musical career. Before he left Curacao however, he offered the very best of his services and talents to the community and especially for the children.

A decade of John’s outstanding accomplishments in Curacao and abroad for 10-plus years.

JJ Cool, appears as a guest soloist and arranger on dozens of recordings by Curacao recording artist. His own recording career includes 7-CDs that were produced both in Curacao and in Atlanta, Georgia. The CD Collection of John James Willekes are: