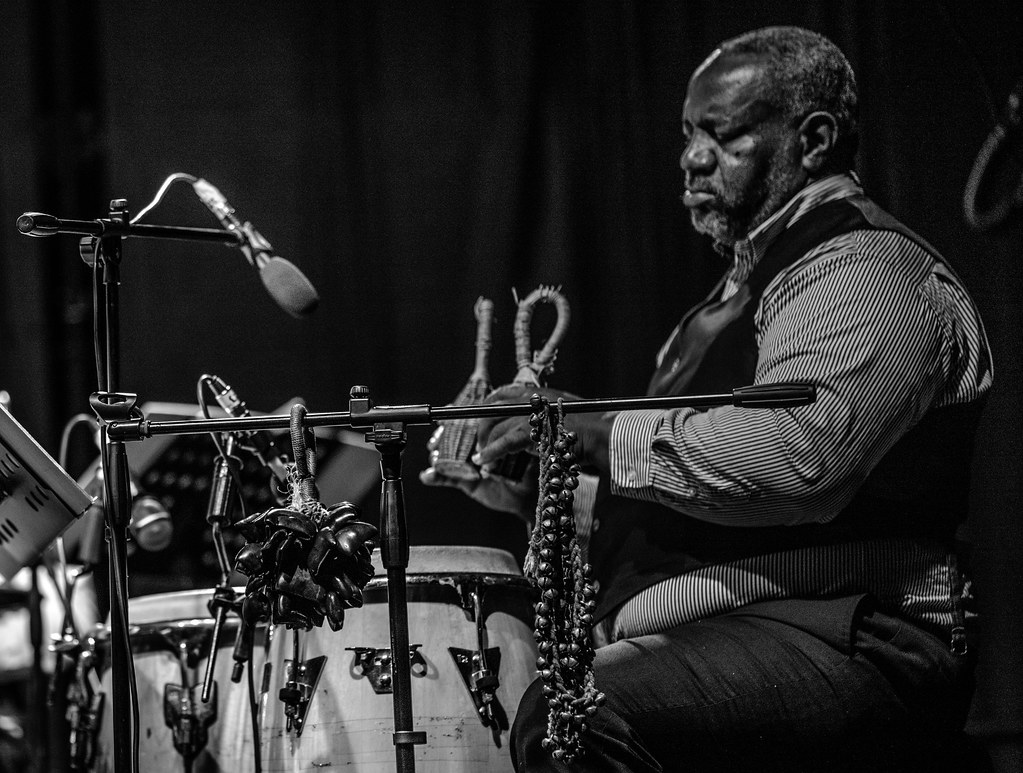 Pernell Saturnino is a Grammy Award winner percussionist born in Curaçao, (former Netherlands Antilles). He started playing percussion at the age of nine. As an 18-year-old young adult he took a big step following his dream to become a professional percussionist by starting to study music seriously and joining one of the best folkloric groups of Curaçao back then: Nos Antias (meaning Our Antilles).

In 1982, he decided it was time to pursue a formal career in music and started a study at the Foundation Institution of Music (FIM). He graduated in 1986 and was determined to continue on the path of becoming a professional percussionist. This ambition made him moved to Boston, Massachusetts in the United States to attend the most prestigious independent college of Jazz and contemporary music in the world. He started his study at Berklee College of Music in 1988.

During his student years at Berklee he performed with numerous well-known musicians like Joe Zawinul, Hermeto Pascoal, Chucho Valdez, Cachao, Micheal Gibbs and represented Berklee College in Russia, with a delegation to promote the school in 1991. In the Boston region, as a first call percussionist, he also performed with Gilberto Gil, Danilo Pérez, Oscar Stagnaro and Rebecca Paris.

He is known for his flexibility and knowledge of various rhythms around the world. Being a perfectionist he always aims to play every rhythm as close as possible to its origin. Brazilian, Cuban, Puerto Rican, Peruvian, and rhythm from Curaçao, to mention a few, he will play it. Manifestly, he has demonstrated his talent and foot printed his style in all the recordings and concerts he participated at, appearing on at least three CD’s yearly, for over a decade.

After graduating at Berklee College of Music he started a musical relationship with Paquito D’Rivera and has been performing and recording with him since 1995 to the present day. D’Rivera is an alto saxophonist, clarinetist and soprano saxophonist, winner of fifteen Grammy Awards, and celebrated both for his artistry in Latin jazz and his achievements as a classical & Jazz composer. Saturnino performed in the following recordings: Trombone man, Juan Pablo Torre; Portrait of Cuba; Island story, Caribbean Jazz Project; Live at Manchester Guild, United Nation; Live at the Blue Note; The Clarinetist; Big band time, WDR big band; Mosaic, Caribbean Jazz Project: Island Story, Calle 54 and Funk Tango).

In 1996, he was invited by Wynton Marsalis to perform in the Atlanta Olympics with an All Star Big Band to represent Caribbean music. He also performed with Lincoln Center Orchestra featuring The Alvin Alley Jazz Ballet and recorded: Sweet Release and Ghost story.

In 1997, he joined David Sánchez quintet and recorded: Obsession, Melaza, Travesia, Coral and Cultural Survival. In 2003, Chick Corea invited him to join The Electric Band Reunion in recording: to the Stars. In 2013, Chick Corea made once again a request on him for the recording of: the Vigil.

Sixteen of the CD’s that he recorded on, were Grammy Award nominated, of which, six actually won the award. He also participated on two CD’s that won the highest price for musicians in Holland, the Edison Award.

Since his return to his native island Curaçao he founded the first percussion school on the island, the Pernell Saturnino Percussion School (PSPS). In 2015 he also established a foundation, the Pernell Saturnino Foundation (PSF), to help talented resource-less children develop their talent and follow their musical dream. Recently, he was invited to join the teacher staffs of the new conservatorium at the university of Curaçao.

While being a full time teacher/clinician at UoC, PSPS and PSF (Pernell Saturnino Foundation), he still travels to perform and record with international artists all around the world like Dee Dee Bridgewater, Makoto Ozone, The Metropole Orchestra and The WDR Big band in Germany as the first call percussionist. He also gives training and workshops around the world.

At Berklee he was honored as Most Outstanding Percussionist in 1992. Grammy Award 2008. Following this recognition he received in 1994 the Latin Percussion Award. In 2011, he won the most prestigious award for people who made an exceptional contribution to the culture of Curaçao, The Cola Debrot Price.