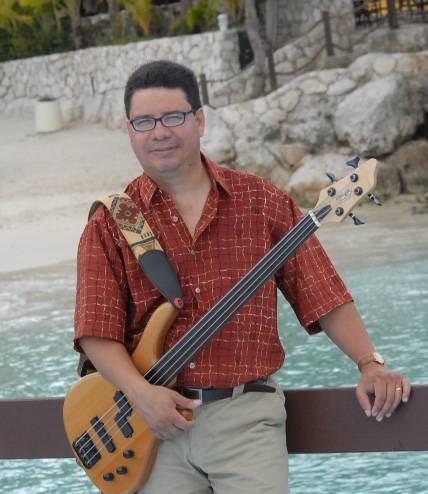 Randy Winterdal is a gifted bassplayer and composer with a distinct personal style. Born on the beautiful Caribbean island Curacao, he started at the age of 15 to play bassguitar in local bands. His talent was soon recognized by local Jazz artist Rudy Emerenciana, who invited him to play in the first Jazzcafé on the island. In the 80’s he left Curacao to study at the Utrecht Conservatory in the Netherlands. Winterdal eventually developed quite a reputation as an allround bassplayer and a fine soloist. He played and collaborated with many groups and artists such as jazztrio Cross Currents, The Ronald Snijders band, The Cedric Dandaré band, Nueva Manteca, Gerardo Rosales, Izaline Calister, Ino Kruysen, Beatriz Aguiar, Michael Simon, Randal Corsen and jazzquartet Crianzas. Apart from these activities he dedicates his time to compose music and created several musical projects such as the suite “The Garden” and other works for symphony orchestra and small ensemble. On his debut CD “Ku pasonan chikí” – released in 2005 – he blends groovy Antillean rhythms with contemporary influences from Jazz and World music. With his second cd “Alma di mi tera”, a beautiful album of musical portraits and impressions, he makes a brilliant transition starting from the traditional Antillean classical music of the 19th and 20th century to present day contemporary music. His aim is to create universal music transcending musical styles. Nowadays he composes music for several groups and leads his group “The Randy Winterdal Ensemble”